Before we found out that Kitty was expecting we had started redecorating our living room, before promptly stopping when the car broke down and our funds were diverted elsewhere.

I say we had started redecorating… what had actually happened is that we had paid someone to come and remove our fireplace, re-plaster the wall, lay a new hearth and leave a nice gap for a new log burner. But with the car needing work we couldn’t afford the log burner any more… plus the £2,800 quote for fitting it was a lot higher than expected! So for a long time the room sat with a bare plaster wall and empty hole.

We did continue to think about what we wanted to do with the room, we’d picked out paint colours and decided that we wanted cupboards put in the alcoves, the TV mounted on the wall, the window seat ripped out and had come up with ideas for decoration.

But between the car and now a new baby to start preparing for funds had become tight. We started buying small things here and there, like a light fitting, the TV bracket, paint, the new mantle shelf and a few ornaments.

We’d built up most of the provisions we needed for making a start, but we just didn’t have the time, or energy, to crack on and do it. But eventually we just had to pull our fingers out and get started.

The window seat is a nice idea, it’s good for storage and provides extra seating when guests are over. But this particular one is not brilliantly made. In fact once we started to remove it we realised that there was a tin of varnish wedged into the floor! Yes, an actual tin of varnish, with the floor cut to fit around it. If anyone has any ideas why they did this, let me know in the comments.

The other problem is that the flooring doesn’t go to the end of the room! Fortunately with the cupboards we plan to put in the alcoves, we might be able to use the flooring from there to fill the gaps, or get a close match.

This one’s easy, just time consuming with all the stuff to move out of the way (oh, the wires behind the TV stand). We’re going with Farrow & Ball’s Stiffkey Blue for the walls, with the ceiling/skirting in their Wimborne White. Once this is done we’re going to make a decision on the detailing around the window, which we kind of want to do in Railings, a dark grey that I’m hoping will make the window appear further away (and thus make the room feel bigger) while also making the wooden details stand out more than the gloss white. The only possible issue is making the room feel dark and cutting out a natural light reflection point.

This is Stiffkey Blue

We want cupboards in the alcoves, with shelves above. The shelves are simple for us to do ourselves, but the cupboards are less so. Mainly because our house is far from straight.

During World War II a bomb that exploded nearby did some damage to the foundations and the house sank a little in one corner. It’s all sturdy now and not likely to move again, but it’s left our living room and bedroom on a slight slope. At first glance you may not notice it, but take a look at the hearth and you can see how much the floor slopes. This was further highlighted to me the day I dropped a bag of Maltesers and watched in horror as they all rolled away from me, disappearing under the TV cabinet.

So we’re getting quotes to see if we can get someone to come in and make us something that will house all our electrical gumpf on one side and DVD’s, games etc on the other. On the TV side we’re going to have a fake wall to hide the cabling behind, with a shelf above the TV for displaying some more bits and bobs. On the other side the shelves will house our globe, a lamp, books and a display case that I’m allowed to put my Lego figures in! (more on that in a later post I’m sure) 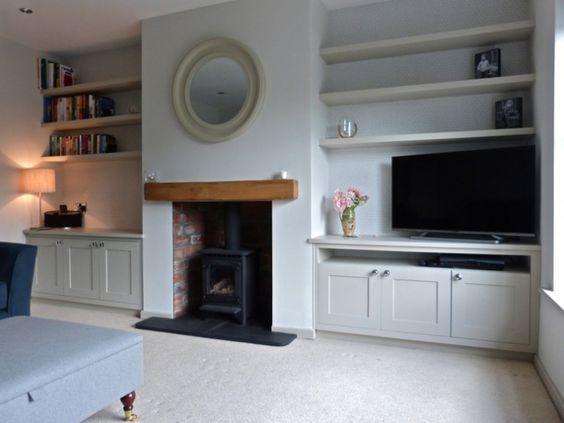 The kind of thing we’re going for…

With the bigger jobs out of the way it’ll be down to hanging some pictures, choosing which Lego figures to display, which books Kitty wants to show off, all that kind of stuff.

But that’s all way off still…

Last time we'd just finished putting in the new floor and painting the walls and ceiling, meaning it was just the cupboards & shelves to go in. That makes it sound like we were really close to being finished, but sadly that wasn't the case.

It's been a productive time since I last posted about our living room makeover, we are starting to get somewhere. In fact, we're almost done. With a week off we've managed to pollyfill, prime, paint and install a new floor!

It seems there are one or two friendly and helpful estate agents left in this part of the world, and a few who don’t charge the earth in “admin” fees. After seeing what seems like an endless number of flats and houses, with our favourite ones being snatched out from under our noses, Kat and I finally found somewhere to live.