Do you ever come up with half an idea? Like the outline to a story without really knowing how to start/end it? Do you then put it to one side and come up with another half-idea?

I seem to have a collection of half-ideas, destined never to be completed. I figured I’d get some of them out there to an audience, to see if any of you can spark some imagination in me to complete these particular stories.

The first is one I’ve mentioned before, Hindsight Boy. So, yes, something similar was done by South Park (and previously Marvel), but the idea has stayed with me for years. Here’s the gist…

So that’s the set-up, and I know how I want it to end too, I’ve just not got the middle bit sorted. I have the first chapter written, in prose, but I’m not sure if that’s the best format for the story, I’ve started to picture it more as a one off graphic novel more recently. I’ve never got past writing more than that first chapter though.

Part of the idea behind Hindsight Boy was “what if Uncle Ben was a dick to Aunt May?” or “What if Thomas Wayne was the criminal and not the victim?” The superhero stories so often have a character that helps mould them and gives them their moral guidance. But what happens when that person is a grade A arsehole?

I guess that aspect has become interesting to me again more recently, with me becoming a father in the near future and becoming more and more aware of just how much our kids learn from us; whether we intend them to or not.

The one thing I’m up for changing though… the name. Too similar to South Park’s Captain Hindsight or Marvel’s Hindsight Lad (who is often included on lists of the worst superheroes of all time).

After putting Hindsight Boy on the back burner I came up with a character called Han and the crew of idiots he works with. The Secret Life of Han was born.

Avenue Health was to be my version of Aviva, based on my time working there. The characters were amalgamations of the people I worked with, I picked character traits from a few different people to create each character… with the exception of Zack. Zack would just be Zack, a carbon copy. For those unfamiliar with Zack, check out @ZackRandom on twitter to see some of his best quotes.

For this idea I imagined a comic book, and I have the first issue scripted and the next 11 issues outlined very briefly. But I kept changing my mind about what I wanted to happen and I just stopped writing it.

Part of me wanted to never see superheroes in the story, so the “is he/isn’t he” mystery would never truly be solved and would instead the whole thing would be some kind of Office Space/Scott Pilgrim inspired weirdness.

Secret Life of Han is kind of saying “we don’t need heroes to save us, we just need to not be so fucking stupid and self-obsessed”.

My original design for Han

Fast forward to this year and another idea struck me. This one I call OAP: Old and Powerful.

This one’s a bit more basic, but then I did only think of it recently! But it’s another story that’s on the fringes of superhero stories, just with a little twist. I think this one is inspired more than a little by Bubba Ho-Tep, and definitely needs a lot more work.

Elvis & JFK get ready to battle evil in Bubba Ho-Tep

So, what do you think of my ideas? Got any suggestions or critiques? I’d be interested to hear what you think, especially if you’re up for fleshing the stories out some more as a co-writer. 😛 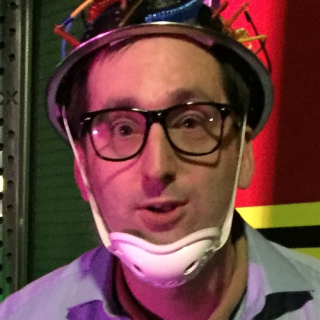